I plan to write about all of it soon, but for now, this is pretty much how I've been feeling for the past 18 hours since I finished:

Sometimes I wish I could express all my feelings in Beyonce gifs, except how would that work because most of the time what I feel is "socially awkward" and does Bey even feel that? Okay, one more:

I'm planning to ride this feeling out FOREVER!
Posted by Beatnik Mary at 6:56 PM 1 comment:

T-minus 11 days and I'm ahead of schedule...or behind, depending on whom you ask

(Does 'whom' in the title sound pretentious? I'm not even sure it's right. I think so? Reading Shakespeare makes me want to improve my English but if I took the Bard's lead I'd probably just start using words like 'whoreson' and 'fye.')

My birthday is in eleven days and I've almost finished my originally goal of reading all the plays by the age of 40. YAY! I'm currently in the middle of Edward III, which is one of those 'contested plays' (Was it written by Shakespeare, or just co-written? Does it even count?) so it feels like extra credit. Plus, I already finished Two Noble Kinsmen, another apocryphal play, so I feel pretty smug right about now.

Or at least I did until I read THIS list of Shakespeare's plays on PlayShakespeare.com: 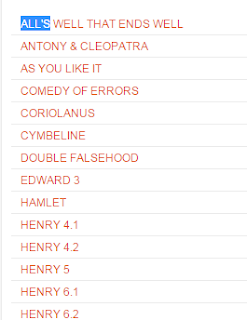 Notice anything? Right below Cymbeline and above Edward III? 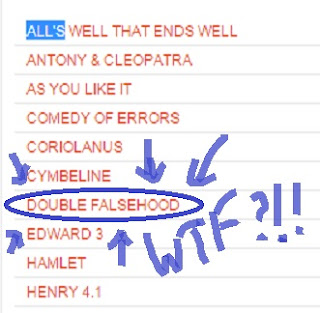 WHAT THE HELL IS DOUBLE FALSEHOOD?? I've never heard of that play! Is that by Shakespeare too? Do I have to read it now?? Is there even a copy AVAILABLE?

Turns out the answer is probably, yes, and sure thing! Play Shakespeare helpfully has the entire play available online, and according to this article on Independent.co.uk, there is mounting evidence that this is a version of Shakespeare's lost play about Don Quixote. Not only that, but the play had previously been considered a hoax for nearly 300 years before researchers in 2015 presented compelling evidence that it was at least partially written by William Shakespeare. So if I had finished this reading project two years ago like I'd planned, I could consider myself done and wouldn't have to worry about newly emerging apocryphal plays throwing off my stats.

You'd think that reading the complete works of someone who's been dead for 400 years wouldn't involve having to keep up with the latest posthumous release.

So now I've decided to add both Double Falsehood and Sir Thomas More (which was really only edited by Shakespeare, but The Riverside Edition includes it, so now I feel compelled to read it) to my list. But even with those additions, I'm still on track to finish by my birthday, especially if I sort of speed-read through those last couple of plays that, let's be honest, I don't take quite as seriously as the others anyway.

Oh, but in the meantime, GUESS WHAT? I READ ALL THE SONNETS AND POEMS THIS WEEK!! Yeah, I'm kind of killin' it. But more on that later. I have to get back to reading!

Posted by Beatnik Mary at 1:23 PM No comments:

I just finished Timon of Athens and I absolutely loved it. I didn't expect to like it, considering it takes place in ancient Greece (not a fan of Shakespeare's ancient Greek and Roman plays in general) and it's one of his least known plays. But it was absolutely hilarious! Granted, it's technically a tragedy so I'm not sure if I was supposed to find it so funny, but that's beside the point.

I'll write more about it once I've reached my goal (only a month left and still 10 plays to go), but for now I'll just say this: If I hadn't set this goal of reading ALL the plays, there would still be some plays that I probably would have read eventually, like King Lear or The Taming of the Shrew, but there's no way I would have read Timon of Athens. I mean, why would I have? Who would have recommended it to me? Has anyone ever recommended it to you? So if for no other reason than I got to discover this delightful gem, I am very thankful I set this task for myself. Well worth it.

Okay, more about this and the rest of the plays later. For now, I have some reading to do!
Posted by Beatnik Mary at 11:02 AM No comments:

Email ThisBlogThis!Share to TwitterShare to FacebookShare to Pinterest
Labels: King Lear, The Taming of the Shrew, Timon of Athens

Oh no! I'm back at the histories!

It was the histories that killed me. I couldn't get through Henry IV Part 2 and I just stopped altogether. Now I've read almost everything else and I just have to power through them. Next up: The Merry Wives of Windsor. Not strictly a history, but more of a spin-off from the Henry IV plays. I hope it's delightful at least. Here I go.
Posted by Beatnik Mary at 8:33 AM No comments:

Twelve-year-old me is VERY demanding

Between now and March 1, 2016 (the day before my 40th birthday) I have the following plays left to read if I want to achieve my goal of completing all of Shakespeare's plays before I turn 40.

This plan was an idea I came up with when I was 12 and, let me tell you, 12-year-old me is a demanding task master. Unfortunately, 22-year-old through to 38-year-old mes were all pretty big procrastinators, so I'm well behind schedule.

Can I do it? Well, since it's the only childhood life goal I ever set for myself that I'm even attempting (I'm not, for instance, a fashion designing nun who can fly somehow), I think I owe it to child me to at least give it a go.
Posted by Beatnik Mary at 1:27 PM No comments:

So far this week I have finished reading Much Ado About Nothing and As You Like It. I loved them both, and I have plenty of thoughts on each of them, but I may have to wait to write about them until I've powered through a few more of these plays. I ONLY HAVE THIRTY-EIGHT-AND-A-HALF DAYS LEFT! I realize "powering through" may not be the best way to fully appreciate Shakespeare's plays, but if I hadn't been such a damned procrastinator I wouldn't find myself having to rush so much to get them all done before my birthday. That's still my goal and, dammit, I'm going to get there.

Email ThisBlogThis!Share to TwitterShare to FacebookShare to Pinterest
Labels: As You Like It, Much Ado About Nothing

ACK! I only have six weeks left! WHY DID I WAIT SO LONG?!?

OH NO! My "break" from blogging has turned into a year and half. How did that even happen? In that time, do you know how many Shakespeare plays I've read? ONE! I've read ONE. I read The Taming of the Shrew (it was pretty good, actually). And that's it.

If you've read this blog before (and bless you if you have) you may know that the whole reason I wanted to read all of Shakespeare's plays in the first place is because back when I was twelve I decided I wanted to have read them all by the time I was 40. And now my 40th birthday is in SIX WEEKS and I'm nowhere near done.  But I still want to try because otherwise I feel like I'm breaking a promise to 12-year-old me AND I'VE HAD SO MUCH TIME.

Next up: Um...let's go with Much Ado About Nothing...is that the one with Don Pedro? Have I already read that one? I'll have to go check.

UPDATE: Much Ado About Nothing it is! Wish me luck!
Posted by Beatnik Mary at 11:43 AM 1 comment:

Email ThisBlogThis!Share to TwitterShare to FacebookShare to Pinterest
Labels: Much Ado About Nothing, The Taming of the Shrew
Older Posts Home
Subscribe to: Posts (Atom)

Beatnik Mary
I am a poet, a teacher, a nerd, a book blogger and now a mother. In everything I do there are never enough words...so I keep looking for them. I maintain several blogs, with varying degrees of regularity, including this one. Mostly I write about books.